Please be patient while we upgrade this board!

Take a sledgehammer and wrap an old sweater around it. This is your "shovelglove." Every week day morning, set a timer for 14 minutes. Use the shovelglove to perform shoveling, butter churning, and wood chopping motions until the timer goes off. Stop. Rest on weekends and holidays. Baffled? Intrigued? Charmed? Discuss here.
Post Reply
9 posts • Page 1 of 1

Hellboy is still in action, but at a total weight of 18.4#, I needed something a little kinder to my joints for everyday use

. "Silver Sagan" fits the bill nicely, at a total weight of 9.4#. Not one to be left out of the fun, my 8-year-old son is getting started with a little shovelglove of his own, "Mjolnirsson," coming in at 3.4#.

Sorry for the lack of updates, here and on the blog. I'll post some soon. 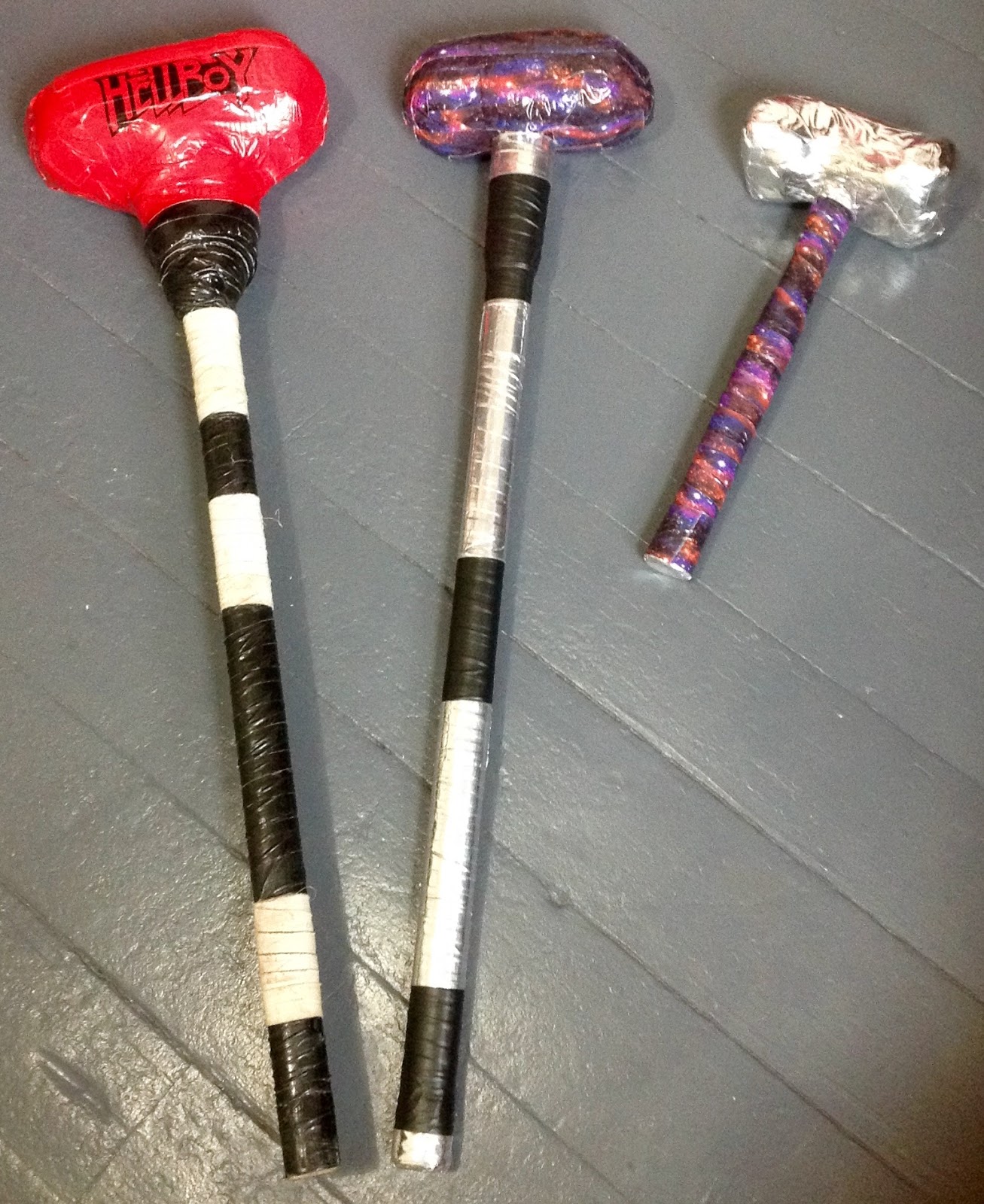 Wow, these are some beauts. Thanks for posting!

My 9 year old daughter will get jealous if she hears your son is starting -- not sure whether to keep that a secret or use it as a motivational tool.

Best of luck to you both and definitely keep us posted!

Haha, thanks Reinhard! I'm actually not a big advocate of "external resistance" training for kids (body weight exercise is fine), but I've got a regular little Tarzan on my hands here! He is very physically active, and his idea of fun is turning up some classic metal and cracking off sets of push-ups, pull-ups, sit-ups, and squats

. I figured a light shovelglove would be safe and enjoyable for him, and the short handle further reduces any leveraged strain on his still-developing bones and joints.

Now his little brother (4) is asking for one... I think I'll buy a small, rubber mallet that he can use to play along.

In Shovelglove--among other things--you've definitely started something that's taken on a life of its own. It's quite a worthwhile legacy

I got a flexbar thera-band for my "uppy elbow" aka "golfers elbow" that my three year old boy likes using as a sort of shovelglove (well, more like a straight up weapon really), he calls it "the rubber truncheon."

Not a bad gateway shovelglove... though now I sometimes have trouble finding where he's stashed it around the house.

Reinhard: How's the flexbar working for you? I think I may have shugged my way into a case of "uppy elbow" as well.

It's definitely helped significantly -- though I can't say it's 100% fixed (doesn't help that my 3-year-old son keeps hiding it!).

I feel fine shugging (with relatively low rep counts -- 14-16 usually -- per movement) and can even bang out modest numbers of chin-ups without pain (7 or so vs the 12 pull-ups I can currently do). These are big improvements -- for a while, even a single chin-up was torture. But it's not gone -- I should be able to do more chin-ups than pull-ups, and the acrobatics I used to be able to indulge in with my son with impunity are significantly more constrained.

Another caveat is that I'm not quite as perfect in my compliance about doing these exercises as I perhaps ought to be. I aim to do them twice every N day, three sets of 15 per session, massaging the affected area between sets. I'd guess my actual compliance is closer to 1.5 times a day on average, possibly even lower. The one time I do reliably get them in is when I do them as a pre-cursor to my morning shovelglove routine.

Anyway, best of luck figuring out what works for you and keep us posted. I hadn't though shovelglove was causally related here, but hey if you've got it too our antennae should be way up. My explanation had been "40+ year old dad can't quite keep up with a toddler anymore," and though I still lean to that, it can't hurt to be extra vigilant. It certainly makes logical sense that any frequently repeated movement could cause some form of repetitive stress injury. I've heared that simple doing too many pullups/chinups (as people are encouraged to do in the popular p90x workout) can also cause it.

So one thing I'd definitely advise is sticking with lower rep counts. Shovelglove shouldn't hurt. If it does, you're doing too many reps, or movements that you should skip entirely. You can always ramp up (slowly) when your body seems ready for it again.

All in all, I'm still convinced shovelglove is quite safe compared with other routines. In the 14 years I've been shovelgloving, this "uppy arm" is the most annoying thing I've run into, and as I mentioned, I'm far from sure that shovelglove caused it. Contrast this with running, about the most "normal" exercise anyone can do, yet leaves me injured several times a year (usually IT band), and I don't even pursue it all that rigorously.

Thanks for the info, Reinhard.

I should have qualified my previous post by saying that (a) I appear to have a rather mild case that gets sore but does not seriously restrict my activity and (b) I have no idea if it was brought on (in whole or in part) by shovelglove.

I'll do some research/experimentation and let you know how it goes!
Top